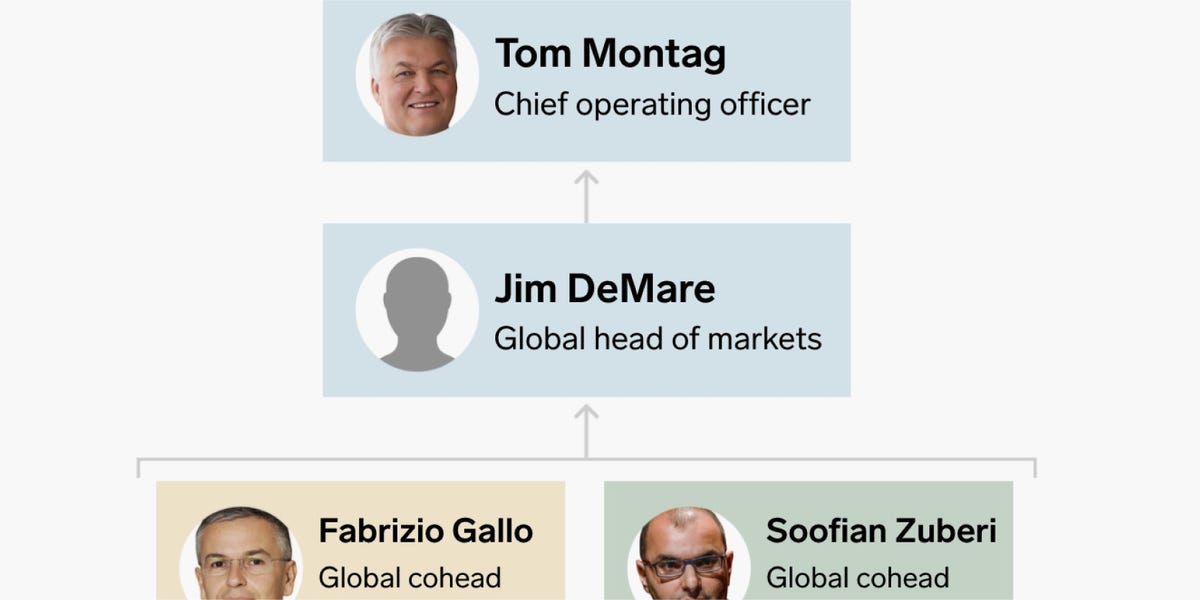 Bank of America may be better known for its bond-trading group, but the firm is also home to one of Wall Street’s top stock-trading shops — which has ranked fourth in the industry for several years now.

But the firm’s equities unit, which in 2019 saw revenues decline 8% to $4.5 billion, is a division in flux at the senior levels for the first time in years.

In July, the bank announced two leadership shakeups, including the elevation of Soofian Zuberi to cohead of the group alongside Fabrizio Gallo, the division’s sole leader since 2011.

Business Insider has been mapping out the power structure in the firm’s global-banking and markets businesses that Chief Operating Officer Tom Montag oversees. We started last summer with fixed income, currencies, and commodities (FICC) — the largest operation in his remit, with $8.4 billion in 2019 revenues.

Last year we spoke with insiders, ex-employees, consultants, and other industry experts to gain insight into the reporting structure within Montag’s stock-trading division. We focused on front-office execs that bear the primary responsibility for driving the group’s revenue — no back-office roles appear in our chart.

A Bank of America spokeswoman declined to comment for this project.

Up until recently, the two sales and trading groups Montag oversees had distinct power structures. Montag, who climbed the ranks at Goldman Sachs on the back of a stellar fixed-income career, has several key direct reports that share power within FICC.

Read more: Here are the 30 most powerful people in Bank of America’s $8 billion bond-trading division, which has had 2 leadership shakeups in 2020

In equities, for years there had only ever been one top dog: Fab Gallo, one of the longest-tenured direct reports in Montag’s world.

The group has been more shrouded in mystery than others at firm, eschewing appearances in public and with the media. Publicly available photos of key leaders, including Gallo, are few and far between.

Gallo, who was a longtime equities exec with Morgan Stanley, was initially hired by Montag to cohead the stock-trading unit in 2011 alongside Mike Stewart. But Stewart decamped for UBS before Gallo got there, and Gallo assumed sole control of the top seat.

According to senior leaders who’ve worked with him at the firm, Gallo consolidated power and never let go, keeping a firm grip on the reins and a tight circle of trust.

But in an organizational shakeup in July, Montag elevated fixed-income trading exec Jim DeMare to global head of markets above Gallo, and he promoted Zuberi, a 25-year company veteran, as his cohead.

Now Gallo finds himself unfamiliar territory. Since joining the firm, he’s reported directly into Montag and never had to share the steering wheel before — much less with an underling who ascended from beneath him.

Who is Zuberi? Employees who have worked with the Reed College and Harvard Business School graduate have described him as well-respected and said he has the ear of Montag.

One said he can be an excellent leader, depending on your relationship to the power structure, which they described as “a boy’s club.”

In an organizational shift earlier in the same week, the bank announced the departure of Julien Bahurel, the head of equities in Europe, and the appointment of Martina Slowey to replace him. Stuart Bourne, formerly head of prime brokerage in the Americas, was promoted to Slowey’s old role as global head of the asset management services group.

Business Insider updated this chart in July to reflect the changes in leadership. We’ll continue to update this chart as needed.

We have also mapped out the most powerful people in FICC and investment banking.

Here are the 20 most powerful people under Montag in Bank of America’s equities division. Note that this chart is interactive, so you’ll have to click through to see full reporting structure.

Have more information about the organizational structure within Bank of America Merrill Lynch? Contact the reporter at [email protected] or via encrypted chat with Signal or Telegram.