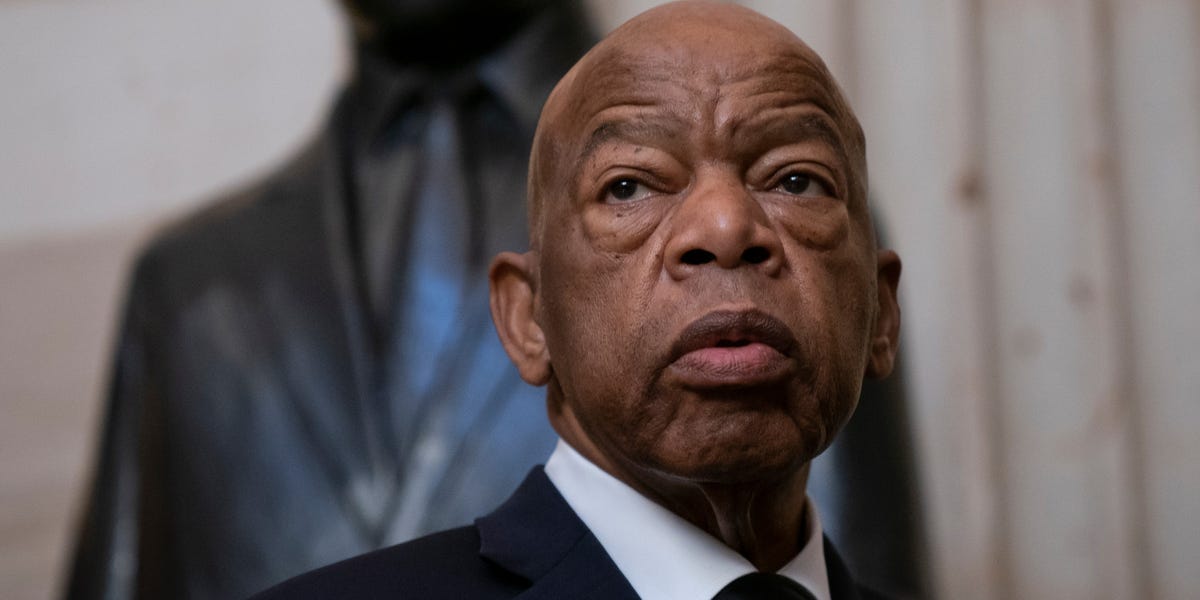 Rep. John Lewis of Georgia died late Friday at the age of 80.

He was a civil rights icon and served in the House of Representatives since 1987. A lifelong champion of desegregation and voting rights, Lewis was one of the original Freedom Riders, a group of civil rights activists who rode interstate buses through the South to demonstrate against segregated bus terminals.

By 1963, when he was just 23 years old, Lewis was known as one of the “big six” leaders of the Civil Rights Movement. He was also the youngest person to speak during the March on Washington that year and was the last surviving speaker from the event until his death on Friday.

Lewis gained national prominence on March 7, 1965, when he led over 600 peaceful protesters across the Edmund Pettus Bridge in Selma, Alabama. The day became known as “Bloody Sunday” after Alabama state troopers violently subdued the demonstrators with tear gas and batons when they reached the end of the bridge. Lewis suffered a fractured skull as a result of the attack.

“I almost died on that bridge for the right to vote,” Lewis recalled during an August 2016 appearance on Comedy Central’s “The Daily Show.”

“I gave a little blood, but other people gave their lives,” he said.

Throughout his tenure in Congress, Lewis became one of the most progressive lawmakers to represent a southern district and developed a reputation for stirring up what he referred to as “good trouble.”

“And I got in the way, I got in trouble,” Lewis said. “Good trouble, necessary trouble.”

“You have a moral obligation, a mission and a mandate, when you leave here, to go out and seek justice for all,” he added. “You can do it. You must do it.”

Lewis’ signature achievement was the passage of the Voting Rights Act of 1965. “Of all the surviving leaders of the movement, Lewis is most responsible for its passage and its overwhelming reauthorization four times by Congress,” Ari Berman wrote in The New Republic.

Later, in 1970, Lewis spearheaded the Voter Education Project, whose goal was to register black voters in the south after the VRA was ratified, Berman wrote. “The VEP registered 2 million voters from 1970 to 1977, including Lewis’s mother and father.”

The Georgia congressman revealed that he had been diagnosed with pancreatic cancer in a statement in December 2019.

In the statement, he said he learned about his diagnosis during a routine medical visit that month. He added that he would continue to serve his constituents in Georgia’s 5th Congressional District while undergoing treatment.

Activists, lawmakers, journalists, and other prominent figures expressed deep sadness and paid tribute to Lewis after news of his death broke on Friday.

“He loved this country so much that he risked his life and his blood so that it might live up to its promise,” former President Barack Obama said of Lewis in a statement. “And through the decades, he not only gave all of himself to the cause of freedom and justice, but inspired generations that followed to try to live up to his example.”

Obama and Lewis had a long and deep-rooted admiration for one another. “I don’t know whether I will be able to control myself,” Lewis told TIME before Obama’s inauguration in 2009. “I’m going to try to keep my balance and not have what I call an out-of-body experience. I want to be able to see down the Mall and past the Washington Monument and get a glimpse of the Lincoln Memorial, where we stood 45 years ago.”

In 2011, Obama awarded Lewis the Presidential Medal of Freedom, the country’s highest civilian honor. And in March 2015, the two men marched side-by-side across the Edmund Pettus Bridge on the 50th anniversary of Bloody Sunday.

“John Lewis was an American treasure,” wrote Martin Luther King III, the oldest son of Martin Luther King, Jr. “He gave a voice to the voiceless, and he reminded each of us that the most powerful nonviolent tool is the vote. Our hearts feel empty without our friend, but we find comfort knowing that he is free at last.”

House Speaker Nancy Pelosi wrote that the late congressman “was a titan of the civil rights movement whose goodness, faith and bravery transformed our nation. Every day of his life was dedicated to bringing freedom and justice to all.”

“We have lost a giant” they said. “John Lewis gave all he had to redeem America’s unmet promise of equality and justice for all, and to create a place for us to build a more perfect union together.”

Throughout his life, Lewis “was always ‘walking with the wind,’ steered by a moral compass that told him when to make good trouble and when to heal troubled waters,” the Clintons’ statement continued. “Always true to his word, his faith, and his principles, John Lewis became the conscience of the nation.”

“A leader in the halls of Congress,” she wrote on Twitter. “And a moral voice for the whole nation. Having the opportunity to serve with him was one of the great honors of my life.”

“A light has gone out of the world tonight,” tweeted Virginia Rep. Don Beyer. “The grief of losing this great soul is beyond words. But we have been greatly blessed — our world is so much better for having had John Lewis in it.”

“The news hits deep,” tweeted the veteran reporter Dan Rather. “And to the core. John Lewis dead. Can it really be? He had strength, courage, and heart enough for many lifetimes. We were young once. So many memories. So much distance traveled. So much further to go. Farewell my friend. We shall overcome someday.”