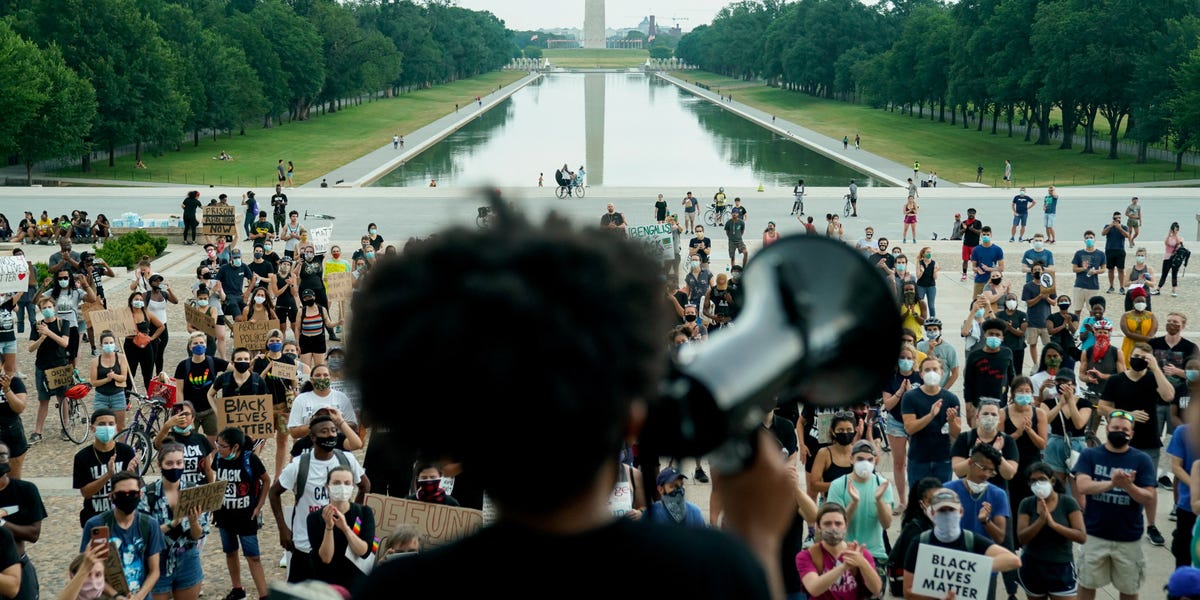 Progressives are getting pretty good at identifying and countering economic arguments when they come from the conservative end of the spectrum. Trickle-down claims that taxes harm growth, that raising wages kill jobs, and that regulations constrain the economy have all largely been disproven. Anyone who has spent time defending a minimum-wage increase from the attacks of their local chamber of commerce knows how to debunk those allegations fairly easily by now.

But it’s harder to combat bad economic arguments when they come from people who consider themselves to be liberal, or even progressive. Joelle Gamble, a member of the board of directors of the Roosevelt Institute and a principal with the reimagining capitalism team at Omidyar Network, has done a lot of thinking about how neoliberal arguments help to keep racist economic systems in place.

“Neoliberalism kind of hides the ball,” Gamble said on the latest episode of “Pitchfork Economics.” “It assumes that free markets rule all, when in reality our economy is shaped by institutions, norms, and policies.”

“We have to be upfront about that — especially if we don’t want economic policies to perpetuate racist systems,” Gamble warned, because those policies “lead to the marginalization of specific racialized groups, especially Black people, in the United States.”

Last month, Gamble published an article in Dissent Magazine titled “How Economic Assumptions Uphold Racist Systems.” In the article, she identifies three pernicious neoliberal assumptions that rig the economy against Black Americans: the idea that a rising tide lifts all boats; that value equals price, and so we get paid what we’re worth; and that the market is fundamentally rational.

The idea that a rising tide lifts all boats — that if the GDP increases, for example, every American will benefit — is a simple economic idea to grasp. But the economic downturn that has accompanied the coronavirus pandemic has disproven this concept over and over again. The stock market has surged even as infection rates have climbed and the wealthiest people in the world have seen their net worth increase even as more Americans than ever are in danger of becoming homeless.

And the recession has exacted a higher toll from Black Americans. When May’s unemployment rate saw a slight decline, Gamble says, “people were really excited” that the massive job losses might be ending. But Gamble notes that the unemployment rate “actually ticked up slightly for Black people” in the same month.

“There’s been this persistent gap in unemployment between white workers and Black workers for decades,” Gamble said. Black workers in America are underemployed and underpaid in ways that don’t accurately reflect their education level, age, or family status. And yet, Gamble says, “we just assume that if unemployment is going down, it’s affecting everyone equally the same time.”

Again and again, workers are told that they are paid what they’re worth — that the market accurately measures their value and establishes a fair price. Gamble says she could see this particular falsehood for what it was on her “first econ class in undergrad. It doesn’t match with a lot of our lived experiences,” she explains, “and yet it’s so pervasive in how we talk about the state of the labor market.”

“Wages are essentially the labor market’s version of prices. And so we assume that the value that a worker adds to the firm is actually what the worker is paid,” Gamble said.

But look at the care work sector of the United States, in which Black workers are overrepresented. “It’s one of the fastest-growing sectors in the country,” Gamble explained, “but the median hourly wages are around $11.37.”

To become a care worker, Gamble says, “some states require an occupational license, there’s a high level of emotional intelligence, and hours of training.” But because Black workers and women of color represent a large percentage of care workers the market incorrectly identifies the jobs as low-skill, low-pay positions.

“With the US having an aging population that would like to be cared for, it’s become one of the most highly valued areas of work that we have, and yet we have not invested in better standards for those workers,” Gamble concluded.

Gamble says the neoliberal belief that the free market is rational inspired an economic theory that since “racism is irrational, the free market will just compete it away because all of the irrational racists will miss out on hyper-productive workers” and the racists will eventually be put out of business by the rational non-racist business owners who hire based on productivity, not race.

Obviously, that didn’t happen. The market isn’t rational or irrational — it merely reflects the human preferences and systems that are already in place. Rather than eliminating racism through economic selection, the market “preferred” institutions and systems that upheld the status quo of white wealth.

These three neoliberal assumptions have been repeated so often that they’re a kind of received wisdom, accepted by lawmakers and policy wonks on the right and the left. Every time they’re unthinkingly repeated and echoed by the media, they sustain a racist economic system.

So what are Gamble’s solutions? “I would make things more democratic,” she said. “When more folks have access to the ballot box, when there’s less influence of money in politics, and when we have public agendas that are accountable to the people they’re meant to serve, we’re going to get better outcomes.”

Additionally, “I would want to make sure that every worker has a union, or access to some other organization at their work site. I think we should be thinking a lot more about sector- and industry-wide bargaining, considering how much the economy has changed,” she said.

Note that Gamble’s solutions would not just benefit Black workers — they’d be great for the vast majority of American workers. This is because the wealth that has been airlifted up to the wealthiest Americans over the past four decades would instead be reinvested in the whole of the American working class, with more regulations and processes in place to ensure pay equity practices that don’t discriminate based on race or gender.

What Gamble is arguing for is a more intentional, realistic capitalism that understands our economic systems reflect the best and worst of us. Rather than waiting for that tide to lift everyone’s boats, or hoping for those huge tax cuts for the wealthy to trickle down, we’d be constructing an inclusive economic system that doesn’t perpetuate the mistakes of the past.