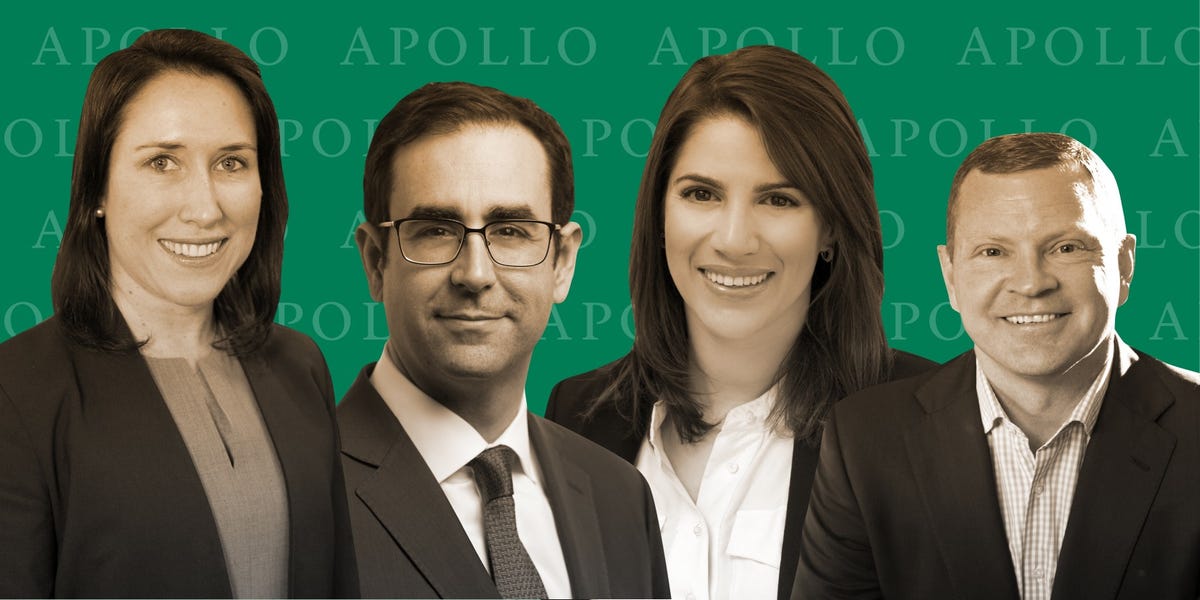 Apollo Global Management is stacking its bench with credit investment professionals to help scout out debt deals as the coronavirus pandemic continues to drag on businesses.

Founded as a private-equity shop in 1990, credit is now Apollo’s largest division, housing more than $210 billion in assets under management, with much of that tied up in mandates of an insurance company it owns, Athene Holdings.

By comparison, Apollo has about $68 billion in private-equity assets, according to its website.

Now the firm is looking to expand even further, adding a new $12 billion direct lending platform to seek out companies that need a loan of around $1 billion. In the past, such deals were smaller — in the tens or hundreds of millions.

“We’re talking about going to much larger businesses and lending them money,” said John Zito, Apollo’s deputy chief investment officer for credit, in an interview.

To help with that effort, it’s bringing on the head of middle-market lending at Goldman Sachs, Dan Zarkowsky, after hiring Tiffany Gallo from Bank of America, and Natalia Tsitoura from Alcentra, earlier this year.

Zarkowsky will join as a partner, Apollo is expected to announce, after Gallo and Tsitoura joined as managing directors.

Read more: Apollo is revamping recruiting and trying to soften its culture amid a big growth push. From kids’ story time to a new MBA summer internship, here’s a look.

Direct lending is an increasingly popular area of investing for some private-equity firms.

When a company needs a loan, it will often come from multiple banks through a syndication process. But with direct lending, there’s a single lender — which means a simpler process — but terms can be pricier, to factor in the risk taken on by the lender.

Apollo has been active in this area, extending last year a $1.8 billion loan to media investment firm New Media in a financing of its giant newspaper merger with Gannett.

Later in 2019, Apollo also provided a direct loan to New Fortress Energy, an energy investor, in the amount of $800 million.

But not all of their loans go to companies with ties to the Milwaukee Bucks co-owner: another direct lending deal that made headlines last year was a $600 million loan to shipping company, YRC Worldwide. And it’s continuing to monitor companies in the US and Europe.

Read more: Apollo is behind a $600 million loan to a public company, and it’s the latest sign that it’s serious about taking on big banks in the lending business

Apollo credit professionals have stayed active during the pandemic

Besides direct lending, Apollo is staying active in other areas of lending, too.

This includes financings from its Hybrid Value Strategy, which invests in both debt and equity, and was behind Apollo’s recent investments in Expedia and commercial printing company, Cimpress.

And, throughout the pandemic, it’s had a hand in financing companies that were disrupted by a shutdown in travel, including United Airlines and Airbnb.

Now private-equity executives and lawyers tell Business Insider that they expect to see more PE deal activity as the pandemic moves into another phase, and business leaders develop a clearer picture of their future financial forecast.

That’s with the caveat that Apollo does not lend to its own portfolio companies, and will also provide loans to corporate, not just sponsor backed companies.

As Apollo gears up for the flurry of deal activity, we decided to take a look at its line-up, and highlight some of the most senior executives who will be pulling the strings behind these deals, as well as those who Apollo has turned to to help bring its credit division to the next level.

Throughout the process, we learned that Apollo has been adding credit professionals across the board — not only direct lending. This includes the addition of Olivia Guthorn, an executive from Brookfield Asset Management who will lead Apollo’s global corporate credit team’s healthcare industry vertical. Her start date is July 27.

The new hires, along with other recent additions — such as Rina Joshi from PointState Capital — show that Apollo is investing big in credit.