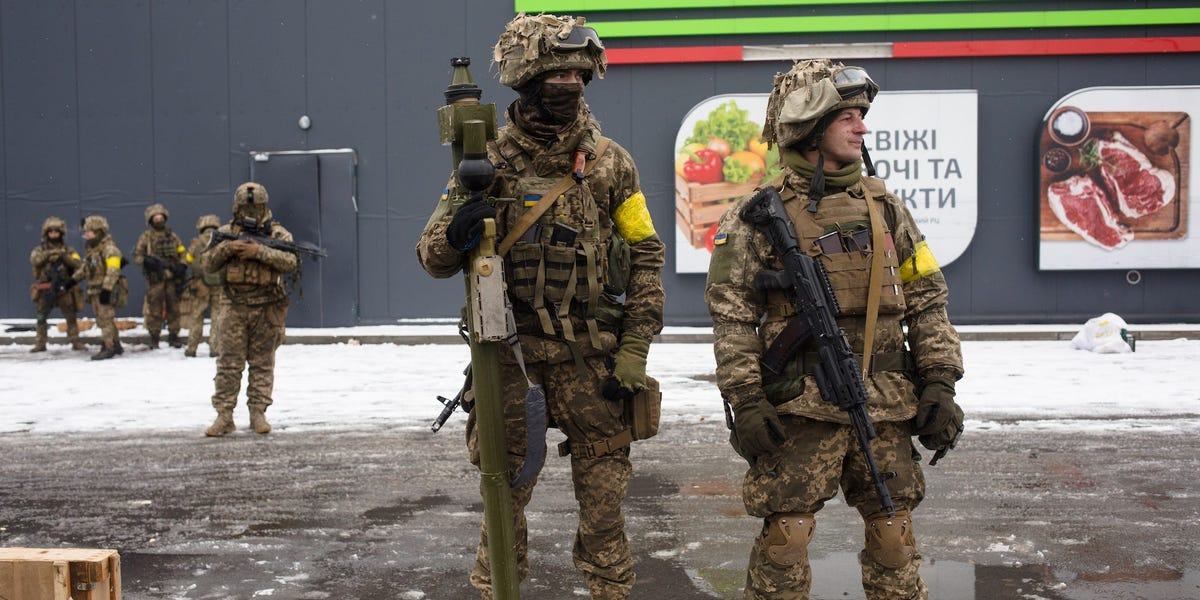 A Ukrainian mother and her two children, along with a church volunteer who was helping them escape Kyiv amid Russia’s ongoing invasion were killed by mortar fire on Sunday as they attempted to flee via a damaged bridge in the town of Irpin.

Hours later, Serhiy Perebyinis discovered the deaths of his wife and children via graphic photos of their dead bodies on Twitter, the father told The New York Times.

A photograph of the family and volunteer covered in blood and lying lifeless in the street taken by New York Times photographer, Lynsey Addario, spread quickly over the weekend, capturing the heartbreaking human toll of Russia’s war, which has included ramped up attacks against populous civilian areas in recent days.

In an interview with the newspaper, Perebyinis confirmed that his wife, Tetiana Perebyinis, 43, and their two children, Mykyta, 18, and Alisa, 9, as well as Anatoly Berezhnyi, 26, were the victims in the photograph.

Serhiy Perebyinis said he was away in eastern Ukraine helping his sick mother when his wife decided it was time to take her children and escape the city after a shell hit their apartment building in Irpin, a city about 30 miles northwest of the Ukrainian capital of Kyiv, one night last week.

But the family never made it out.

In order to escape the city, the travelers had to cross a hundred yards of exposed street on the side of a ruined concrete bridge with no cover, according to The Times.

Berezhnyi, a church volunteer who had already evacuated his own family but returned to Kyiv to assist others, was with Tetiana Perebyinis and her children when they made their run to safety, the outlet reported. But the group was a mere 12 yards away from where a Russian mortar shell hit and the explosion of shrapnel shards killed them all.

The Times’ photograph showed Ukrainian soldiers standing over the bodies with the family’s luggage strewn about the street.

It was their luggage — some suitcases and backpacks — that ultimately led to their identification.

“I recognized the luggage and that is how I knew,” Serhiy Perebyinis told The Times.

He said he began seeing posts on Twitter reporting that a family had been killed in a mortar strike while trying to escape out of Irpin. Finally, a post with a photograph came across his feed and he knew.

Serhiy Perebyinis told The Times that it was important that his family’s deaths were recorded in photographs.

“The whole world should know what is happening here,” he said.

Addario, the Pulitzer-Prize-winning photojournalist who took the photo, said she witnessed a war crime after she saw the family killed.

“I went forward and found a place sort of behind a wall and started photographing,” Addario said in an interview with “CBS Evening News” host Norah O’Donnell on Monday. “And in fact, within minutes, a series of mortars fell increasingly closer and closer to our position until one landed about 30 feet from where I was standing and it killed a mother and her two children.”

The photographer said she acknowledged that it could be disrespectful to take a photo of the family but she felt had to document the moment that painted the reality of the Russian attack on Ukraine.

“I think it’s really important that people around the world see these images,” Addario said at the time. “It’s really brave of The New York Times to put that image on the front page. It’s a difficult image, but it is a historically important image.”