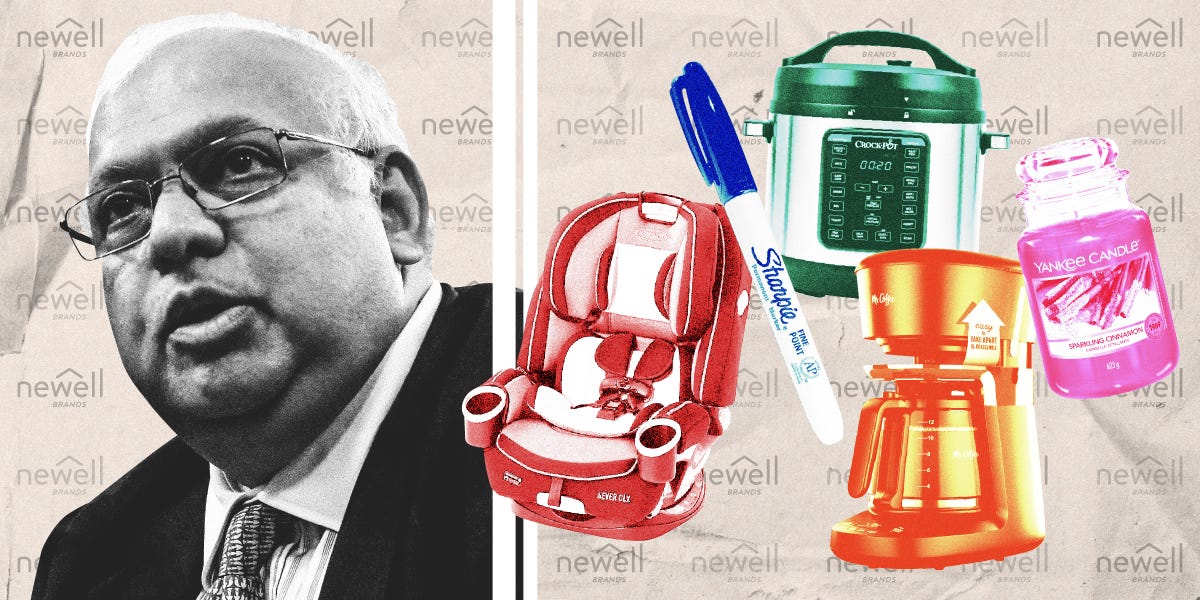 The CEO spot at Newell Brands seemed like an unenviable position in 2019.

Three years prior, the company had been created in a merger between Newell Rubbermaid and Jarden Corp. Executives at the combined company clashed over strategy and results started to underwhelm analysts in the quarters after the deal closed. Eventually, the troubled company got attention from activist investors including Carl Icahn, who won seats on Newell’s board.

But to Ravichandra Saligram, it was a “once-in-a-lifetime” chance.

While his most recent executive experiences have been outside of the CPG world, Saligram has been on the board of Church & Dwight, maker of Arm & Hammer and Kaboom, for 14 years.

“I had never run a CPG company,” he said. “To get in here was a great opportunity.”

Read more: Razor maker Harry’s CEO explains why it’s on the acquisition hunt and getting into cat food after its hopes of being acquired by Schick’s parent company fell through

Saligram, who goes by “Ravi,” has been the top executive at the consumer products maker since October 2019. While consumers are unlikely to recognize the Newell name itself, it’s likely that many own Sharpie markers, Mr. Coffee machines, Coleman camping lanterns, Rubbermaid storage tubs, or other products that the company is responsible for.

Under Saligram’s tutelage, Newell has started to chart a new course. His early acts as CEO have included finding new leaders for a number of the company’s product divisions. He has also overseen efforts, largely begun before he started the job, to reduce costs and eliminate underperforming products. Sales of many of Newell’s products, especially ones related to food, home care and recreation, have boomed during the pandemic, giving the company a ready market for new items.

He has also sought to unify the company, which remained divided for years after the merger between Newell and Jarden and whose executives often fought over strategy, according to the Wall Street Journal. Much of the disagreement reportedly involved Martin Franklin, who founded Jarden and became a director at the combined company, and Michael Polk, who served as CEO until 2019.

“He was brought on as a unifying voice,” Kevin Grundy, an analyst who follows the company for Jefferies, said of Saligram. The infighting between executives like Polk and Franklin “was a tremendous pressure on the organization and the culture that Ravi entered into.”

An ‘ongoing’ relationship with activist board members

Newell warned in October that sales growth could be flat during the holiday shopping season, which would mark a slowdown from the 7% increase it reported for the previous quarter. Analysts have prodded Saligram and other executives during recent earnings calls about how much of that growth resulted from changes to the business as opposed to temporary COVID-driven buying.

Asked about the outlook, Saligram pointed to progress Newell has made introducing new products and selling more through online retailers. “COVID just helped give a push” to results in 2019, he said.

“That’s not true in every business, but I think we’re beginning to make headway,” he added. Newell’s writing and office supply business, which includes Elmer’s glue, X-Acto knives and Waterman pens, has suffered during the pandemic as consumers work from home and kids attend school virtually.

Then there’s the board, which includes three members whom Carl Icahn and fellow activist hedge fund Starboard Value nominated in 2018 after a proxy fight.

Saligram called his relationship with the board “ongoing” but said he has been able to work with its members to guide the company through the pandemic. At one point, for instance, he successfully lobbied the board to make employee bonuses less reliant on the performance of individual business units as pandemic-driven sales distorted sales as a way of measuring success.

“I’m not being a shill, because I’ve been on a lot of boards that are dysfunctional,” he said.

“I’m not here to try to prove myself, so it’s not about my ego,” he added. “It’s about making the company successful, and the board recognizes that. I think that was partially why I was chosen.”

This isn’t the first time Saligram has taken the helm at a troubled company. He led a move to e-commerce at Office Max as CEO from 2010 until 2013. More recently, he was the top executive at Ritchie Brothers, a Vancouver, British Columbia-based auction house for industrial equipment. There, he oversaw an acquisition and pushed the company to move more auctions online.

The old Newell ‘gave up’ too quickly on new products

Many of the turnaround efforts at Newell were already underway when Saligram began as CEO thanks to the board and CFO Chris Peterson, who served as interim CEO for three months in 2019 before becoming CFO, a role he still holds. The company has cut about 40% of the items it sells over the past two years, for instance, to streamline production and focus on the fastest-moving products.

While analysts speculated at the time that Peterson was a top contender for the CEO role, Saligram called him “one of the best CFOs I’ve worked with.”

“What I told Chris was that the issues in the company are not for any one person to solve,” he told Business Insider. “And a year later, I think he and I are terrific partners.”

One area where Saligram has made a mark is on the leadership of the company’s product divisions. Since he became CEO, Newell has hired new business unit CEOs from outside the company for its appliance and cookware segment, which includes brands like Crock Pot and Mr. Coffee, as well as its food division.

Saligram’s marching orders to his new hires were to clean up what he saw as a “bureaucratic” structure within the company.

Prior to his arrival, Saligram said, teams that focused on new products, marketing, and other areas were shared across dozens of disparate brands. With the new management, he said, those functions are now divided up across the product areas, allowing them to pursue their own strategies.

“You cannot be an expert when you have a hundred brands,” he said. “No one person can be an expert, and you become a blocker.”

That organizational change has allowed for new products and fresh advertising behind brands like Rubbermaid, which Saligram has said could “again become a jewel in Newell’s crown,” referencing its success in the 1990s.

Among his early assignments to the brand’s leadership was to revitalize a line of sealable food containers sold under the Rubbermaid Brilliance name. Newell has sold the containers for years, but they only started gaining market share against competitors after the company put fresh effort into selling and promoting them.

“When it came out, it was a great innovation, but our teams probably gave up on it too quickly,” Saligram said. “They didn’t really scale it.”

Newell has also released new products to cater to consumers’ needs during the pandemic, such as an iced coffee maker for people stuck at home and food storage containers that use a silver-based coating to defend against microbes.

Innovations like that will be important to Newell’s comeback, Saligram said, including as it competes in many categories with private-label products. Amazon has introduced thousands of private-label products in recent years, including many in food storage, ball-point pens, and other areas where Newell has sizable businesses. The Seattle-based technology giant was also one of Newell’s top ten retailer customers in 2019.

“Everyone, when they see success, will want to get in,” Saligram said of private-label competition. “But the key is: Can they sustain, can they build enough equity?”