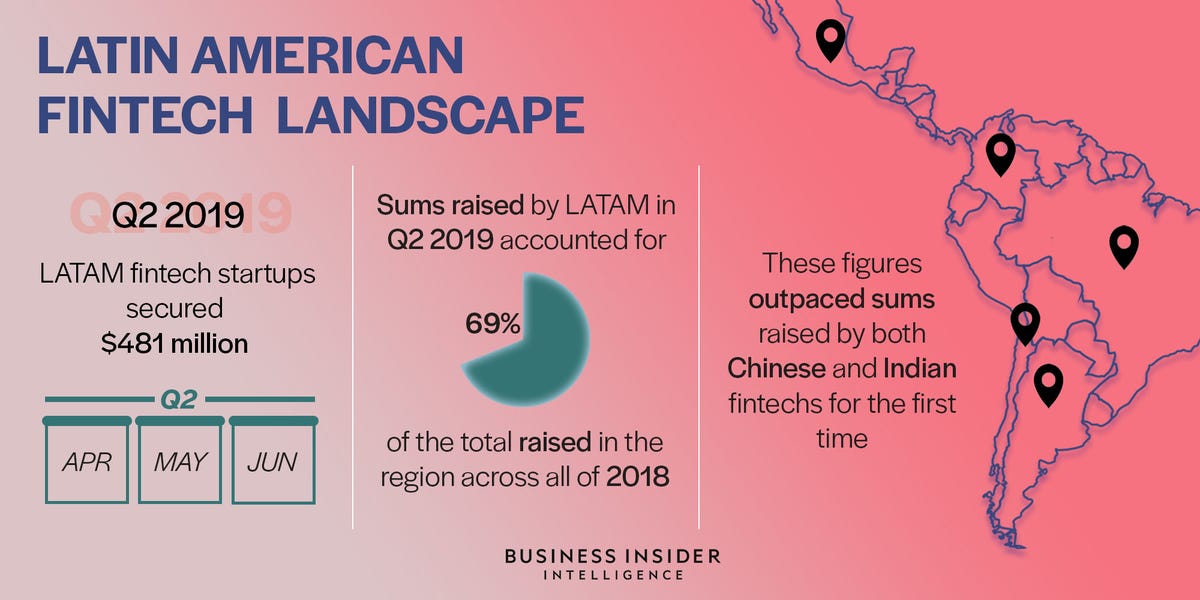 Fintech has had a staggering influence globally, catapulting to new highs in major financial markets like the UK and the US, but Latin America (LATAM) has lagged behind — until now.

A massive fintech boom is taking hold in the region as innovative upstarts look to leverage widespread smartphone and internet penetration to serve the region’s massive unbanked and underbanked populations and small- and medium-sized businesses (SMBs).

Meanwhile, authorities in many of these countries have enacted fintech-friendly regulations, having identified fintech and digital financial services as a way to provide widespread financial access, while international investors have honed in on the region as an attractive investment space as it becomes harder to identify and compete for these startups in mature markets like the US and UK.

And the pace of fintech growth in the region is evidenced by the vast sums LATAM startups have raised: In Q2 2019, fintechs secured $481 million, representing a six-quarter high, at least, and accounting for 69% of the total raised in the region across all of 2018, per CB Insights.

In fact, those Q2 funding figures outpaced the sums raised by both Chinese ($375 million) and Indian ($350 million) fintechs for the first time — both notable Asian hubs that typically rake in substantial funding. All told, LATAM’s fintech ecosystem represents a huge opportunity, with the size of the industry estimated to exceed $150 billion by 2021.

In the Latin America Fintech Landscape report, Business Insider Intelligence identifies five key fintech markets in the region — Brazil, Mexico, Colombia, Argentina, and Chile — that provide meaningful insights into LATAM’s fintech ecosystem. The report explores the factors driving fintech growth in each country, identifies the key fintech segments within each market, and discusses what has made major players in each segment successful as well as how they can improve going forward. Finally, we examine opportunities and challenges in each country to illustrate how fintechs and incumbents can leverage the progress already made to further transform the region’s financial services landscape.

Here are some of the key takeaways from the report:

In full, the report: