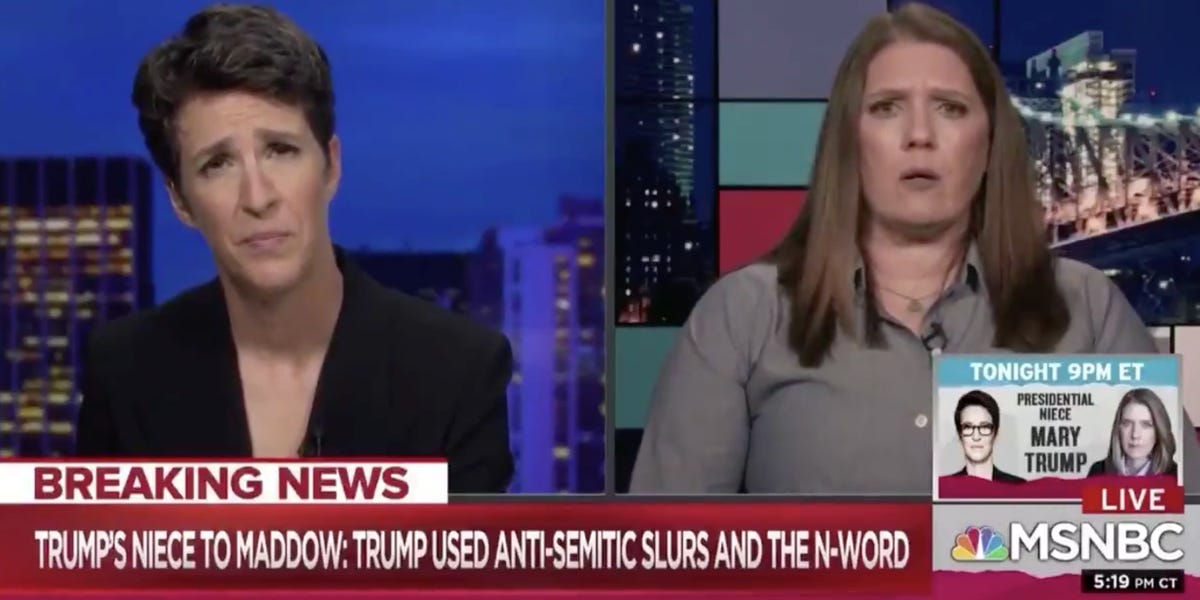 President Donald Trump’s niece, Mary Trump, gave a new interview with MSNBC’s Rachel Maddow in which she said she had heard him use racial slurs including the N-word.

It added specificity to a claim in an earlier interview with The Washington Post in which she said such terms were often used in the Trump family but did not specify who used them.

“Growing up, it was sort of normal to hear them use the N-word or use anti-Semitic expressions,” she told The Post.

On Thursday, Maddow asked Mary Trump whether she had specifically witnessed the president using the expressions, and she said she had.

“Of course I did,” the president’s niece replied. “And I don’t think that should surprise anybody given how virulently racist he is today.”

“This is a book of falsehoods, plain and simple. The President doesn’t use those words,” Matthews said in a statement to Business Insider.

Mary Trump’s new book, “Too Much and Never Enough: How My Family Created the World’s Most Dangerous Man,” was released this week despite attempts by the Trump family to block it.

In the book, Mary Trump, a clinical psychologist, describes decades of dysfunction in her family that she claims left her uncle psychologically scarred. She says he has personality traits so toxic a second term with him in office would herald the “end of American democracy.”

Trump has long been accused of deliberately stirring racial grievance as an election strategy. Former employees, including a former personal attorney, Michael Cohen, have accused the president of making racist remarks in private.

Allies of the president have defended him against the charge, with Housing and Urban Development Secretary Ben Carson in July, as quoted by Politico, claiming the president had fought for “Jews and Blacks to be included in the clubs that were trying to exclude them.”